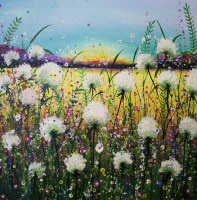 Wendy Carlton has spent her whole lifetime painting.  She  initially studied textile design in Nottingham, achieving a 1st class (hons) degree.  She was among 30 students nationwide who were chosen to take part in a Budding Designers exhibition at the Design Centre in London. As a result of this she was offered a job with a leading design studio, designing fabrics which went on to be sold worldwide. Many of Wendy's

Having gained valuable experience working in a design studio, Wendy decided to take the brave step to become a freelance greetings card designer as she had always preferred creating one-off images. This decision proved to be correct, as Wendy had a successful career for almost 20 years designing greeting cards for all the major companies, including Camden Graphics, Hallmark, Simon Elvin, Paper Rose, as well as many high street stores and supermarkets. Her cards would often be seen on TV, in soaps such as Coronation Street and Eastenders. The majority of Wendy’s work in the greeting card industry was Flowers or for Children’s card due to her preference for bright bold colours.