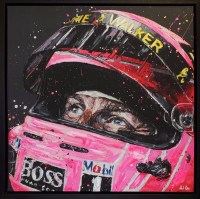 Paul Oz is an explosive British portrait artist – focused on the maximum 3D impact and energy in thick oil paint. Well known for travelling the world live painting with Formula One – recently Paul has also created work with Team Sky on the Tour of Britain, Chelsea FC to celebrate their 2017 title win, and for Lamborghini at the launch of their Urus. Headline commissions include for Muhammad Ali’s 70th, by Star Trek to celebrate 50 years, and a portrait of Bruno Mars presented to him in Las Vegas to mark his 24k Magic World tour.

Within F1 Paul has live painted for Scuderia Ferrari VIP’s in Monaco, with Mercedes AMG Petronas in Barcelona, and has created several portraits for Jenson Button – including one live with McLaren in Abu Dhabi at his last race to celebrate his career. Also creating work personally for Lewis Hamilton, Sir Jackie Stewart, Pirelli – and by both Ayrton Senna and James Hunts families to mark 20 years. Recent shows include ’80’s Kid’ in London, The Art of Star Wars, sell out shows at Abu Dhabi, Mexico City and Singapore F1 weeks. Shown in every Paddock Club on the F1 calendar worldwide. Paul is a longstanding member of the team here at Wishbone Publishing and continues to prove to be a diversive and vibrant addition to our collectable stable of British artists.