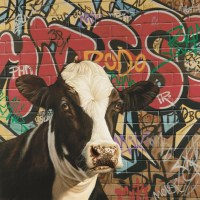 A leading contemporary animal and landscape realist painter renowned for the skill and craftsmanship with which he depicts the fine detail and realism of the many textures portrayed within his imagery. He is an exceptionally gifted and unique animal and landscape artist. Essentially self-taught, Paul began painting professionally in 1986 and it was the haunting beauty of Charnwood forest that greatly influenced his early atmospheric landscape, together with his animal portraiture for which he has perfected a style of his own. Paul has become well known in recent years for his combination of wildlife within urban settings which was inspired by his observation of ducks walking along towpaths while he lived on a canal boat. He is also an accomplished performing musician and composer.