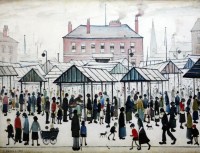 LS Lowry was one of the greatest British artists of the twentieth century. He was also one of the most unusual. The images of ‘match-stick men and match-stick cats and dogs’ with which he became associated were - and remain - a totally unique strand of European art. His paintings record with wit and sensitivity his interpretation of the lifestyle and architecture of the industrial north of England during the middle of the last century. Laurence Stephen Lowry was born in 1887, in Manchester. An only child he began to draw at the age of eight and began private painting classes at the age of fifteen, the year before he left school. In 1904, he joined a firm of chartered accountants as a rent-collector and clerk and he remained in full-time employment throughout his life until he retired at the age of 65. So concerned was he to be seen as a serious artist that it was not until after his death that it was revealed that he had actually made his living away from the easel. Lowry lived in and around Manchester for most of his life but it was not until 1916 that his highly individual style began to evolve. Inspired by the sight of workers leaving a local mill, he began to explore in his work the industrial areas around him, declaring later that: “all my material was on my doorstep”. Originally, his work focussed on the sombre industrial architecture but the housewives, children and workers in his paintings became increasingly central to his painting in later years.  Characteristic of Lowry’s works are their very pale backgrounds, which help to emphasise the importance of the architecture, and the very limited use in his oils of only five colours: flake white, ivory black, ochre, prussian blue and vermilion, all of which were applied directly from the tube. Careful composition was also central to the success of many of his greatest industrial paintings, where the canvas was filled to overflowing and where every section bursts with life and activity. Lowry exhibited regularly at The Royal Academy from 1932 and was elected an Academician in 1962. A shy and reserved man, he carried with him a sense of loneliness and isolation throughout his career, perhaps in reflection of his early failure to achieve recognition. Increasingly withdrawn, in later life he refused many honours, including the offer of a knighthood and even membership of the Order of Merit.  Lowry died in 1976, at the age of 88. The Royal Academy held a Memorial Exhibition of his work in 1976, at which the Academy President, Sir Hugh Casson, referred to Lowry as ‘one of the greatest English painters of this century’. A fitting tribute to a remarkable artist.