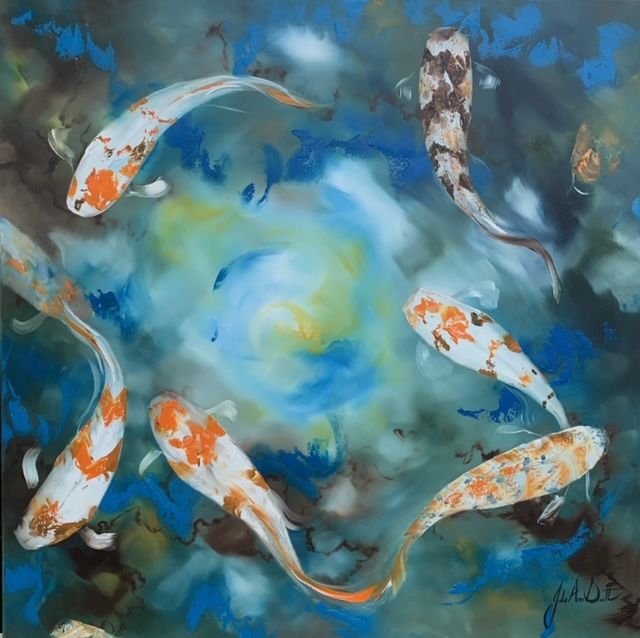 How many times have you been transfixed by a view only to lose it as the horizon changes, caught a glimpse of a wild animal in motion just as it disappears, or woken from a vivid dream which all too quickly evaporates? Acclaimed artist Julie Ann Scott has the gift of capturing such mesmerising moments with the artistry of a magician commanding light to strike for a moment in time - sometimes through cloud or water - illuminating and transforming the normal into the spectacular.

Julie Ann Scott has had an exciting life. She was born into an RAF family abroad, grew up in both the north and south of England, and set off after leaving school, where despite suffering from dyslexia she excelled at art, to find her real father. Subsequently, she spent an eventful and adventurous time abroad working as a catwalk model in Israel, an actress in California, and travelling around much of Eastern Europe carrying out mission work. Eventually Julie Ann returned to England to start creating art again, teaching herself to paint in oils by working every day for a year in a studio where her dazzling style developed.

Having spent 20 years living in and inspired by the beauty of the Lake District and establishing her artistic career nationwide, Julie Ann moved to Dorset on the spectacular south coast of England. She continues to transform her canvases by the use of dramatic light and shade whether the subject is floral, the transient flash of fish below the surface of the sea, or a breathtaking landscape with clouds above riven by a shaft of sunlight.

Endlessly inspiring joy and hope in the observer, Julie Ann's acclaimed paintings capture the vibrancy and mood of those magical moments, leaving their sense of awe and wonderment to last forever.

"Art should speak for itself, like a grown up. . . . At our very core is where the catastrophic shift should be. All art should do heart surgery. This is what I try to achieve. I work chiefly using imagination, light, and colour to create a mood and atmosphere that will lift the human soul to a position of hope."

"Life is fast and fierce. Sadly, a lot of very pure moments of what I call 'soul visions' are lost in the rush. My paintings capture these secret hidden beauties that seem to drain away almost as soon as we see them. Like when we are driving along and we see a sudden fabulous view that is breathtaking, but then the moment has passes. I'm inspired by not only capturing them but inventing them too. Using my imagination, I create my own 'soul visions' and inspire others to remember theirs."