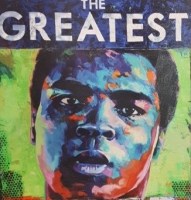 James was born in Manchester in 1966 into an artistic family. At school he was considered outstanding and from a very young age he was actually taken out of lessons to paint. He received commissions from staff and parents and as a teenager he was runner up in a major art competition. So in the matter of a career choice he says quite simply, "there was no choice!"

After studying at Tameside College of Art James set up his studio in Cheshire. As a result of featuring in a series of successful one-man shows in th local area, he quickly established a formidable reputation in the artistic community as a creative and versatile young talent.

In the early days James was inspired by unconventional outdoor scenes that combined interesting shapes, textures and colours; a particular favourite was his local scrapyard, especially on a rainy day. He liked to explore the idea of man's incursion on the environment and the obvious next step for his work was the cityscape. With success came the opportunity to travel the world in his quest to absorb the sights, sounds and atmospheres of his chosen subjects, and this experience has informed his stunning depictions of New York as well as various European locations .

James loves to experiment with art materials and creates his atmospheric images in a wide variety of media. He exhibits in galleries in Europe, the USA and across the UK and has a range of prestigious private and corporate collectors. His work in on show in the boardrooms of such prestigious companies as BT and Siemens.

James’s powerful, ultra-stylish compositions stop us in our tracks as effectively as the speeding Ferraris they portray. A striking example of modern male success, James is talented, innovative and competitive, with that traditional masculine weakness for the sexier things in life – particularly fast cars. His images contrast the myriad greys of sidewalks and skyscrapers with occasional ventures towards the bolder end of the spectrum. To achieve this distinctive look, James approached a bespoke pastel manufacturer and had over 50 different shades of grey individually created ranging from oyster to ash, from iron to dove, from seawashed pebbles to cloudy skies. These allow him to describe every nuance of concrete, smoke and sky to stunning effect with minimal use of the more conventional range of colours, a stylistic achievement which has won him a unique place on the contemporary art market.