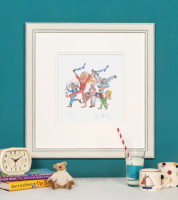 We are very excited to present the official collectors limited edition prints from some of the most famous and respected illustrators of children's books.

Roald Dahl was born in Wales in 1916 to Norwegian parents. After a distinguished career as a fighter pilot and diplomat during the Second World War, Roald Dahl settled down to become a full time author; first writing popular stories for adults, then, later, retelling many of the stories he made up at bedtime for his own children.

Roald Dahl died in 1990. His work had been published in over 40 languages and today is considered a modern classic.

"I could never guess what he was going to think of next." Quentin Blake

Beatrix Potter was born in London in 1866 and grew up living the conventionally sheltered life of a Victorian girl in a well-to-do household. Beatrix Potter was educated at home by a governess with her brother Bertram. Her constant companions were the pet animals she kept which she enjoyed studying and sketching. On summer holidays Beatrix delighted in exploring the countryside and learning about plants and animals from her own observations.

Beatrix Potter's career as a children's illustrator began when 'The Tale Of Peter Rabbit' was published by Frederick Warne and Co. in 1902. The public loved it as soon as it appeared and Beatrix went on to produce on average two books a year until 1910. In the early years of publishing, her editor and Norman Warne and they fell in love and became engaged in 1905. Unfortunately the marriage never took place as Norman died suddenly.

The money earned from her 'little books', as she called them, gave her financial independence and Beatrix Potter began to purchase property in beloved Lake District. In 1913, Beatrix married William Heels, a Lakeland solicitor, and made Sawrey her permanent home. Writing and painting began to take second place to farming, sheep-breeding, and buying stretches of the beautiful Lakeland countryside to ensure their conservation.

When Beatrix Potter died in 1943, she left over 4,000 acres of land and fifteen farms to the nation.

Anita Jeram - Guess How Much I Love You

Sometimes when you love someone very, very much, you want to find a way of describing how great your feelings are. But as Little Nutbrown Hare and Big Nutbrown Hare discover, love is not an easy thing to measure. Sam McBratney's enchanting bedtime story 'Guess How Much I Love You' is illustrated by Anita Jeram, and is an international classic which has been translated into over 27 languages.

Anita Jeram's beautiful illustrations were a labour of love. Even today, Anita says, "Every time I read this book, I want to cry. The story reminds me of my son, who often plays these games with me when it is time for bed."

'Guess How Much I Love You' was first published in 1994 and ever since the story and illustrations have captivated adults and children the world over.

Helen Oxenbury currently lives in London and is among the most popular and crucially acclaimed illustrators of her time. Helen has illustrated numerous books for children including Smarties Book Prize winning 'Farmer Duck' by Martin Waddell, 'We're Going On A Bear Hunt' by Michael Rosen, as well as her classic board books for babies. Helen also won the Kate Greenaway Medal for 'Alice in Wonderland'.

Michael Rosen is one of the most popular poets and authors of books for children. His titles include 'We're Going On A Bear Hunt' which was the winner of the Smarties Book Prize, 'Sad Book', and 'Totally Wonderful Miss Plumberry'. The presenter of 'Word Of Mouth' on BBC Radio 4, he received the Eleanor Farjeon Award for services to children's literature in 1997. He became Children's Laureate in 2007.

Barbara Firth - You And Me Little Bear

Barbara Firth achieved success relatively late in life with her rich, warm, evocative illustrations for children's books, the most successful being the classic 'Cant You Sleep, Little Bear?' written by Martin Waddell.

Barbara Firth grew up in Chesire and, although encouraged in her art at school, Barbara never studied art and she delighted in this lack of training: "I have been very lucky, as my career in drawing is also my favourite hobby."

After training in pattern-cutting at the London College of Fashion, Barbara Firth was offered a job in Marks and Spencer's design department, but she turned it down in favour of a position at Vogue, where she worked for 15 years as a production director on kitting, crocheting, and dressmaking books. Barbara Firth then worked in production for Marshall Cavendish books, as well as supplying freelance illustrations, and it was there that she met Amelia Edwards, one of the founders and the first creative director of the children's publisher Walker Books. Barbara's career as an illustrator started to flourish, "My style started to get livelier: now I can be too exuberant, but once I'd found it was acceptable to draw in that way, there was no holding me."

Though she was a very private person, Barbara Firth knew much about people, animals, and the world. She shared her knowledge with deep feeling and sensibility. Generations of children have loved and will always love, her books; and her long collaboration with Martin Waddell brought a joyful richness - at once emotional and comical - to story times across the world.

Barbara lived in Harrow, London, for the greater part of her adult life, with her sister Betty, who survives her, with a large family of animals always at hand - including the original Waldo, the tortoise, now more than 100 years old.

"I've been so lucky to have a career doing what I love best. I've always drawn plants and animals from a very young age."

Her realisation of Martin Wadell's touching story of Big Bear helping Little Bear overcome his fear of the dark by bringing him bigger and bigger lanterns, before taking him outside to show him how the moon - the biggest lantern of them all - is always there, touched a chord with parents and children. Barbara Firth created an engaging, rumpled and shambling Big Bear and an enchantingly bright-eyes and eager Little Bear. Their cave is a haven of cosiness and Firth's illustrations are full of depth and surprise, as well as charm. The book became a bedtime classic and won several prizes around the world, including the 1988 Nestlé Smarties gold award and a Kate Greenaway medal.

"I have always been biased toward illustrating natural history, so it was a joy to draw pages and pages of bears."