Hapshash and the Coloured Coat 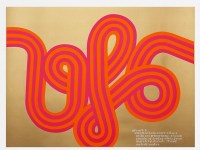 Nigel Waymouth and co-conspirator, Michael English, under the name “Hapshash and the Coloured Coat”, redesigned the London poster scene in the 1960s!

They created posters for the notorious UFO Club at Tottenham Court Road and featured incredible bands such as Pink Floyd and Jimi Hendrix. At the time, these were designed as immediate visual extravagancies, transient and temporary, but now these are viewed as beautiful pieces of modern history that capture an era and people, deserving of protecting and preservation. Hapshash and the Coloured Coat posters from the 1960s are increasingly rare and fetch large prices when they do appear for sale. Some of these originals are now held by the Victoria and Albert Museum, who held a retrospective of their work in 2000. A number of dubious reproductions began to appear at this time and to combat this, Waymouth produced a new set of silk screens, signed and stamped by way of authenticity created from the original plates, not later reproductions. These are unnumbered but production has already been discontinued on several pieces already, making them highly collectable and soon expected to be as rare as the original and 2nd printings on the open market.

View all Hapshash and the Coloured Coat Products