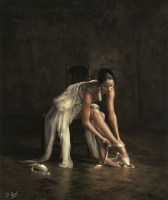 Darren Baker has become one of the UK’s most collectable artists since his remarkable portrait of the Queen was unveiled by Princess Anne at Westminster Abbey in 2011. Darren has painted Prime Ministers, Royalty and the sporting elite, and his celebrated works hang in collections from 10 Downing Street and the House of Lords to St James’s Palace. His oil paintings and charcoals have attracted critical and popular acclaim - the Sunday Times described his work as "thrilling" and "virtuosic" - and his paintings are increasingly sought after by art collectors from the UK, Europe, the USA and Japan.

Darren has enjoyed a level of success that most artists only dream of. He has produced an impressive portfolio of figurative work and portraiture, still life and interiors, cityscapes, and animal portraiture which graces many prestigious public and private collections around the world. He has worked alongside and produced paintings for such star sporting names as Lewis Hamilton, Steven Gerrard and Amir Khan, while his non-sporting portraits include HRH Prince Charles and Tony Blair. His portrait of Pope John Paul II was greeted with a personal message of appreciation from the Vatican.