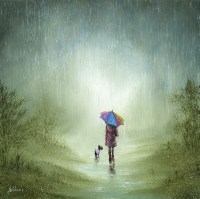 Danny Abrahams is a totally self taught landscape artist. Born in Bradford in 1977 , Danny took an interest in sketching and painting from an early age.During his teen years he discovered a love for music , becoming an accomplished musician , writing songs and playing guitar for the rock band 'The Hoover Dams'. He found moderate success with the band , gigging at venues all over the UK , appearing on TV and doing live performances on the radio.On reaching his thirties , he found that his love for art was starting to take over, and while he still enjoys writing songs and performing , art has become the focal point of Danny's life.  As a true Yorkshire man , Danny has been influenced by the the local beauty of the northern landscape and been inspired by his many travels during his career.Danny has a love for the surrounding environment , finding beauty in everyday 'images' . The sky is a powerful subject in Danny's work , it never ceases to amaze him , the overall beauty , emptiness , rawness and power of an everyday natural wonder that most of us take for granted.Danny prefers working with oil on canvas. It favours his natural ability to capture the many 'moods' of the landscape  and the magical 'skyscapes' that have become Danny's focal point.  Inspiration for his work comes from everyday situations , whether it's from staring through the window on a cold and wet evening , or taking a stroll through the Dales on a Summer's day. As he sit's down in front of a bare canvas , he lets his natural ability and creative mind take over , using vibrant colours to create  'amazing and magical ' landscapes