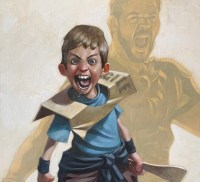 Craig Davison has enjoyed drawing for as long as he can remember, with art being his favourite subject at school and a great way to pass a lazy weekend.

In the late 1980’s Craig worked as a cartoonist, working on pre-school comics, the style of which has helped inspire his instantly recognisable art style.

Craig continued his artistic career at a computer games company as an animator and games designer, where he began sculpting reference figures for 3D animation.

In 2007 he entered a contest held by Washington Green. Craig finished in the last three. That was it, the life of an artist beckoned!

Many artists inspire Craig. Amongst them are the comic book artist Mike Mignola, the simplistic still characters of Yoshitomo Nara, the energy of Goya, and the superb illustrations of N.C. Wyeth. Craig also cites his childhood as the biggest source of inspiration for his work. He tries to capture the endless summer holidays spent out on his bike with friends, rescuing Mexican villages from bandits!