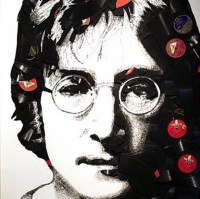 Staffordshire artist Ben Riley was born in 1981. As soon as he could pick up a pencil Ben started to draw and paint, his flare becoming apparent to all those who saw.

In 2002, Ben’s love of art went from a passionate hobby to a profession, selling his iconic eye catching portrait paintings worldwide and gaining notoriety for the way he captured the mood, soul and character of the subject.

His unique painting method creates a sensational finish, by using only record fragments Ben recreates iconic figures. Even the detail of the artwork is made from ground-down record dust. No pigment at all is used in the creation of each piece.

With celebrity collectors of Ben's commissioned pieces and several features on television and in the press, Ben continues his career as an accomplished artist and is expected to go far in the art world.