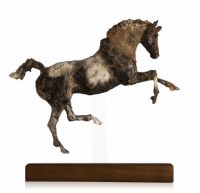 April Shepherd is an established British sculptor producing highly expressive works exploring movement and the natural world. Her sensitive yet unsentimental animal studies have won her considerable acclaim, with the horse in particular being her main subject matter. Her concepts are often enriched by her love of literature, folklore and mythology.

April’s smoke fired horse series explores the idea of weightlessness; that through the expression of extreme and spontaneous movement, even a brawny animal like the horse can defy its intrinsic earthbound nature. Employing a variety of media including clay, bronze and resin, April attempts to push the boundaries of the materials she uses. Working entirely without armatures allows her to maintain full control of the evolving piece and energise the forms she creates. Through loose yet definite mark making, she works vigorously, ‘pulling out’ a shape that

The surface of the work is inspired by the effect that smoke firing creates. As smoke licks around a form it leaves a resinous variegation. These marks coalesce into a dramatic and naturally derived canvas, tracing a permanent record of the fire. The perspex in the mount allows the work to further defy gravity, imbuing the forms with life affirming energy.

April has been selected for a number of commissions including a series of life-sized bronze figures for Morgan Stanley. Her work is held in private collections worldwide and has been shown in many mixed exhibitions at venues including the Royal Academy. Her sculptures were recently selected for display at the British Embassy in India.