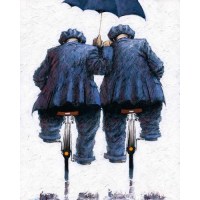 "Even though it was the 60s that I grew up in it felt more like the 40s,” comments Millar, “as the village seemed to be in some time warp stuck between the industrial revolution and Brig O Doon, and as with most wee places in Scotland, Springside had its fair share of “characters” most of whom I was related to in one way or another.”

Even as a child Millar was always fascinated by the small details he saw in everyday life. He would stand in awe at something as insignificant as an old man getting off a bike, a woman with bad hips struggling onto the bus, or the way a drunk would stand by the local pub negotiating a chip to land somewhere in the region of his mouth. He describes it all as a street dance, produced for him only, and made what seemed ordinary and mundane quite fascinating.

“I guess that is the whole premise of the work that I produce in that I still take delight in turning the “ordinary” into something “extraordinary”.