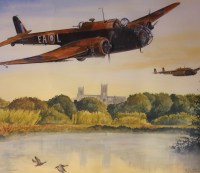 Local artist Alan Wallis enjoyed technical drawing and art at school, both of which he received an O Level equivalent in. He nearly took the path of an art student but joined the army instead.

After leaving the army, he went into the print industry where he is currently employed at Brayford Plastics on the outskirts of Lincoln.

In 1984, Alan met his wife, Rita, and they now have two daughters and one grandson. While out walking his Labrador, Alan slipped and broke his leg, requiring six weeks off from work. It was during this time that he began sketching again and dabbling in watercolours. He quickly realised how much it relaxed him and his friends and family were quick with encouragement, especially his wife who, according to Alan, has the job of quality control. Ever since, it has become his favourite pastime, alongside fishing and football.

Alan loves aviation art and has been inspired by likeminded artists such as Robert Taylor and Nicholas Trudgian, although their medium of oils isn't something that Alan has yet taken the leap of faith to try.

A direct descendent of Christian Frederick Zincke, a prolific miniaturist painter in the mid-18th century who's work can be found in the Victoria and Albert Museum, London, it is no wonder that Alan's work is so detailed and evocative.