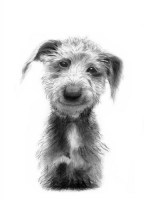 Al Hayball derives much inspiration from the creatures and coastline around his Dorset home. His wildlife drawings let the animal's character shine through, whether it be captured in the way the eyes are drawn or that little smile he includes in some of his subjects.In a departure from his usual naive way of painting, Al has taken a change of direction and now portrays wildlife, in this unique style of graphite, (featuring hares and his 'muse', Tilly the Whiplington Lurcher!). Using a range of pencils, on Bockingford watercolour paper, his priority is to capture the personality and essence of the individuals he chooses to portray. The movement created in the drawings relates a depth of quirky realism, that enables the observer to view the scenes as if they were leaping from the surface of the paper!  Al says, "I am really enjoying this new way of working and am looking forward to taking on new animal subjects'.Al has always had a vivid imagination and sense of humour, from his school days when he would doodle in the margins of his exercise-books, to the evenings in the smokey old Bristolian pubs his dad would frequent on 'darts' night, where you would see him sat in the corner scribbling 'caricatures' of all the locals, very much inspired by Scarfe and Steadman.It is only in recent years he became a full-time artist. Upon leaving school Al worked for a Bank, then became a printer and eventually joined a graphic design studio as Production Manager. This experience was a useful insight into the art world.He says,"I feel my work to date has only scratched the surface of my imagination and ideas. I am excited about new projects and possibilities that lie ahead."