Stepping through the red door your eyes behold the elegantly displayed and beautifully painted canvasses by Ann Pollard. The indoor and outdoor light hits each piece which allows the works to radiate a warmth, in various ways the collection become life-like. Tempting the viewer to step into the painting and to experience what the Artist see’s.

Florals. Landscapes. Seascapes. It’s clear that Ann Pollard has her own style, blurred between abstract and impressionist she uses the pallet knife in a gestural approach. Creating movement in the scene almost creating a sense of comfort as though someone has been there. Segments of her new collection have developed an ambiguity, where you are asked to question what the subject matter is. Specifically within ‘Grey/Orange Abstract’ the expressive movement within the light verses the dark colour pallet somehow forms a sense of calm. Where the light hits the canvas it creates a sense of a break through, as though something is expected to emerge from the space behind it.

Colour, as always is very important within Pollard’s work where she emphasises each subject matter through composing each scene. Where vibrancy becomes the focal-point and showcases how vital colour is to capture the essence of a place.

- The new collection seeps a visual pleasure which exceeds expectations.

Find works in all of our galleries, please contact to see available works.

Propaganda In Art - Part of our 'Poster Power' Exhibition

Posters have a long history of propaganda - being used by particular individuals or parties to make a point that agrees with and supports their ideology. Some of these posters were so effective that they have entered a cultures psyche and can be used to reference or symbolise the ideas associated with them to the wider public. We have a collection of Chinese propaganda posters as part of our ‘Poster Power’ exhibition, as pristine examples of politics and art. These three pieces were created in 1967 to promote Mao Zedong’s regime. They use hyper-realism and heavily use the colour red to promote messages of a revolutionary people in support of the proletariat and against bourgeois mentalities.

This piece features soldiers, farmers and factory workers all together holding forth the Little Red Book which contained a selection of quotes from Mao which summed up how to life a ‘Red Guard’ life.  This symbolised their loyalty to Mao whilst also stressing the importance of these peoples to Mao’s regime all in one image.

This piece shows a soldier with his red armband in the forefront, marking him as part of the Red Guard. This illustrates the other side of propaganda; instead of focusing on the positives of the regime and the happy citizens like the other works, this piece instead focuses on the consequences of not being part of the regime. The dramatic pose, looking like he is shouting those words, ‘we will crush the dog heads of those who oppose Chairman Mao’ at the viewer forces a mental ‘with or against’ reaction. This experience is a key part of why propaganda is so effective throughout history and why we now treasure these pieces as historical artworks.

‘The Many Accomplish Great Things’

Workers march happily forward on their way to work below Chairman Mao as the sun. Some are again holding forth the Little Red Book which summed up how to life a ‘Red Guard’ life in a series of quotes from Mao. It is said that in the 1960s the Little Red Book was the most printed book on earth, so great was its influence. It was not uncommon for citizens to have multiply copies on them and in their homes. In the background the red flags fly all about, showing the huge swell of support for the regime. The head of Mao in this piece was appropriated by contemporary artist Shepard Fairey’s in his ‘Obey’ piece. Even today the influence of these pieces persists.

We Popped Up In Nottingham!

This space got to show off our newest Modern Masters exhibition, 'Poster Power', as well as other great works from the masters of art, including Emin, Warhol, Hirst, Picasso, Mattisse, Miro, Piper and many others! We had a great time meeting new faces as well as saying hello to familiar one's a little closer to home.

The Grand Opening Was Friday 17th to Sunday 19th November! 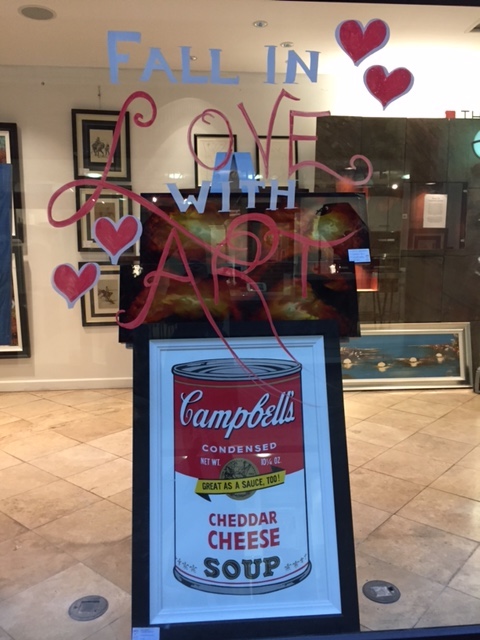 Unfortunately all good things must come to an end and our Pop-Up has now closed. You can still find us in Lincoln and Stamford and we'll keep you updated for our next Pop-Up in Autumn 2018!

We had a baby - Introducing The Little Red Gallery Stamford

We are extremely excited and proud to announce the opening of our second gallery! In April 2017 we opened, The Little Red Gallery Stamford, with an idea we knew what we were up to and only a few small last minute things to set up (like internet - eek!). It is going from strength to strength as we become established with the local community and get to meet some amazing local talent - if you haven't already check out Paul Southwell's awesome Sculptures!

Please come and find us at 8 St Mary's Hill, Stamford PE9 2DP, contact us at 01780 762288 or This email address is being protected from spambots. You need JavaScript enabled to view it. and fall in love with art all over again! We can't wait to see you!

At The Circus with Lautrec

Henri de Toulouse-Lautrec was a notorious French painter. Lautrec was a larger than life figure that immersed himself in the ‘seedier’ side of 19th century Parisian culture. He was the only son of Comte Alphonse and Comtesse Adele de Toulouse-Lautrec, (his younger brother was born in 1867 but died the following year), who were an aristocratic family from Albi. Their social standing and wealth enabled Lautrec to enjoy a number of leisure pastimes until he fell ill at around the age of 11 or 12, at which point whilst confined to his bed he began to draw in earnest, encourage by both his mother and grandmother. Unable due to his health and societal expectations to enter a profession acceptable to a gentleman of his stature, his family agreed to his apprenticeship to, Leon Bonnat, a painter whom they deemed of good social standing.

Now in Paris and on his own, Lautrec left behind the respectable society portraits and instead his paintings focused on the dancing girls, performers and prostitutes of 19th century Paris and in particular, Lautrec became synonymous with the infamous Moulin-Rouge. Lautrec rejected the high-class artistic establishment instead focusing his work on the everyday fantasy world that this district of pleasure created. For the Moulin-Rouge, Lautrec created a number of lithographic prints in high volumes that were used as advertising materials for the establishment, performers and performances. These prints were used as disposable advertising posters and pasted around the city with few surviving today. And both art historians and collectors treat those that do with great reverie. Lautrec changed the way that consumers interacted with his artwork in 19th century France and through it he gained an incredible notoriety both in his day and after. Lautrec immersed himself in this life, earing the respect of the working girls and proprietors, in fact he even lived in some of these establishments for a time, so involved and trusted was he. Unfortunately Lautrec’s party lifestyle mixed with his already ill health was untenable and he died at the age of 36, three months before his next birthday.

Facsimile Reproductions from the Original Portfolio

These pieces are from Lautrec’s circus portfolio. Lautrec created the original collection of crayon and chalk drawings in the spring of 1899, just two years before his death, while he was at a sanatorium undergoing treatment for his alcoholism. In fact it was these drawings, with their beautifully intricate details (recalled from memory), that convinced staff at the institution that Lautrec was well enough to leave. Supposedly, upon leaving the institution, Lautrec said “I’ve bought my release with my drawings”. And looking at this collection it is easy to see why. The depth and delicacy of these works are exquisite – especially when we remind ourselves that these were done from memory months after Lautrec had last been to the circus.

The pieces we have in the gallery are facsimile reproductions of Lautrec’s original drawings. These lithographs were published in 1967 by Harry N. Abrams as part of a collection of 22 pieces that were put together from the Lautrec’s 1899 drawings to make this collection, “At The Circus”. The collection consist of the following works, Jockey, Clown Trainer, Female Trainer, Curtain Call, Performing Elephant, Bear Performing, Female Clown, Circus Acrobats, Entering The Ring, Tightrope Dancer, Performing Horses, Performing Horse, The Flying Trapeze, The Pas de Deux, Haute Ecole – The Spanish Walk, Haute Ecole Equestrienne: Pointage, Haute Ecole Equestrienne: Taking A Bow,Haute Ecole Equestrienne: The Tandem, Equestrian Acrobatics, Bareback Rider, Equestrienne: Riding ‘En Panneau’ and Clown Training a Horse and Monkey. This was the first reprint of these works since the original collection were published in 1905. Both collections are now out of print and copies are incredibly rare to come by and even rarer in good condition. Each piece from the collection measures 18 x 25 cm, is monogramed in the plate with Lautrec’s signature, ‘HTL’ and has been beautifully framed to keep as much of the original details as possible while also showing off the work in a modern finish.

Thank you to everyone who came to meet Yorkshire artist Rayford and be dazzled by his beautifully ethereal cityscapes and then be bowled over by his stunningly captured wildlife portraits. Truly an artist for all! While his originals have left both galleries for the next stop on his tour - his limited editions are still available to order and (while it's still here) you can still view his beautiful Lincoln original!