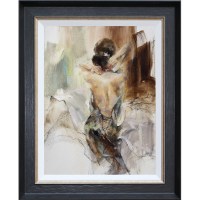 Born at the height of the cold war, Anna was exposed to very different worlds, that of the austere communist regime alongside the sophistication and femininity of her fashion-conscious mother. These two different environments went on to later be incorporated within Anna’s artwork.

Anna excelled at art school and enjoyed the freedom of learning and perfecting her technique in a variety of different media. Of particular interest to her were the portrait masters of the late 19th Century, John Singer Sargent, the Russian painter Valentin Serov, and earlier masters such as Peter Paul Rubens and Rembrandt. She travelled around Europe absorbing the influences of artists past and present, and finally settled in Canada which she now feels to be her true home.

With her classic figurative forms Anna Razumovskaya magically captures the lyrical romanticism of renaissance portraiture, while creating art that is completely modern and original. Her art has a pervasive sense of ‘romanticism’, and the mixture of media she uses and the artist’s signature use of expressive colour, combine to create her uniquely recognisable style that has made her one of the most exciting and collectable artists on the contemporary art scene.