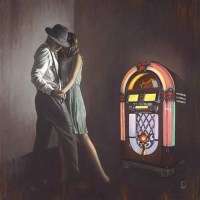 Born in Stourbridge in the West Midlands Richard had a happy but pretty average childhood for a kid growing up in the eighties. His favourite place to be was outside but if he was ever inside he loved to be creative, especially with art and music.

On leaving school Richard went to art college to study 3D design and although he enjoyed the course, as with many teens he was easily distracted and eventually dropped out of art college early.

Richard spent the next few years gigging with various bands up and down the country before finally deciding to go back and reclaim his education. He applied for university and it was a toss-up between studying art and studying music, but he decided to go for music.

However, while at university Richard was inspired to try oil painting and was instantly hooked. Before he knew it friends and family were asking if he could do portrait commissions and ironically soon the art was helping to pay for the education in music. He was determined to do well in university and it was hard but he left with a first class BA Hons.

Richard loved painting so much that he was curious enough to see if he could paint some original compositions and to his surprise they turned out well, not only that but he was lucky enough to sell most of them too. He has since spent the last few years selling his work both privately and in UK galleries while developing the style and technique that he has today.

Richard Says: “People sometimes look at my work and draw comparisons to other contemporary artists but as a painter I’ve always been more inspired by artists like Vermeer, John William Waterhouse and in particular Caravaggio. I’m amazed by not only the way they painted with their dramatic use of light and realism but by the way they managed to make their paintings look like a scene straight out of a modern movie.

I’ve been a massive fan of film and music my whole life so I suppose it’s hardly surprising that I took influence from them both when I first started to paint and still do today. A lot of my very early work contained musicians or scenes from films and I still find myself scrambling for the remote to pause a film because I’ve seen something that would make a great painting.

I only really paint the things that I love and the things that inspire me. I also like to try and tell a story or create a bit of mystery. A book, film or song can do this but they have more time, the challenge is to capture a similar feeling in the snap shot of a single image and this is what I strive for. I am never truly happy with a piece unless I feel it holds enough mystery to stop and intrigue the viewer, if only for a moment.”