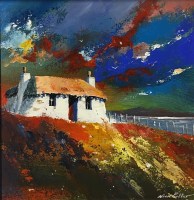 Nick was born in Chesterfield, Derbyshire (of 'crooked spire' fame) in 1959. Despite attaining an 'A' in art at ALevel he was encouraged to go to University rather than Art School. He read Archaeology at Leicester University followed by a P.G.C.E.

In the early eighties Nick moved to the beautiful village of Great Bowden in the heart of the Leicestershire countryside. Living in the country and fuelled by frequent visits to Cornwall, Scotland, and the Lake District he became much more interested in Landscape painting. This led to years of experimentation with different media, which is when he discovered the vibrancy of acrylic inks, using them like watercolour paints to create stunning scenes.

This was the beginning of a new enterprise named Altered Images,a small company that sold Nicks prints to galleries across Derbyshire after having moved back there in 1988.

In 2003 Nick and his wife became partners in another venture, Charisma Gallery in Matlock. The gallery showcased Nick’s works along with several other talented artists and craftspeople from all around the UK. Owning an art gallery had always been a dream of Nick’s and the experience gave him the encouragement he needed to take his art to the next level, professionally publishing his work and exhibiting in galleries throughout Britain.

Nick paints in his garden studio to the sound of Audio bookson tape or CD. He is so attuned to this way of working that he cannot paint without them, they are as much a part of the painting process as the paint or canvas.

Having decided on the composition in a sketchbook he carefully but quickly sketches in the details. All this planning is often covered by the first coat of paint. He then decides on a 'mood colour’which will unify the painting, however the first coat of paint may be the exact opposite. Nick paints with acrylics for their versatility and quick- drying properties. He paints quickly, employing various textures, dribbles, splatters and scrapings.

Nick now lives yards from the sea in Embleton on the fantastic Northumberland coast where he is inspired by the landscape and seascapes every day.