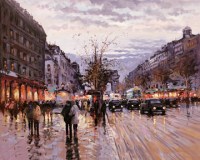 Born and brought up in South America, Henderson now lives in London, but still loves to travel the world painting the drama and diversity of modern metropolitan life. He has formed an intense and affectionate artistic relationship with many of the world's most iconic cities, and his arresting interpretations breathe life into the elegant boulevards of Paris and the imposing skyscrapers of New York.

Voted Artist of the Year by the UK's galleries, Henderson is also the holder of the coveted John Solomon trophy, which is awarded annually to the artist judged to have made the greatest impact on the art market; a testament to the fact that his work has been both successful and immensely influential in the world of fine art. He has been the subject of a beautiful fine art retrospective and biography, 'City Living'.