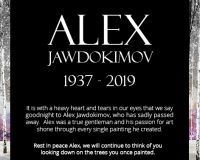 Alex Jawdokimov is an amazing man - he was born in Smolensk, Russian originally but now lives in Gloucestershire. He had what can only be described as a horrific childhood as during world war two he was interned in a concentration camp with his mother and then following their liberation by Russian forces he was placed in a gulag. Eventually they were released and emigrated to the UK in 1947 where they settled in Somerset for a time. Alex was already fluent in four languages and learnt English extremely quickly. He became a naturalized British citizen after five year here. From there he began training at the Somerset College of Art and went on to have several creative successes including working as an illustrator and designer, a dancer (he toured the world for a while with a Russian Cossack Company), a musician and even actor. He has been in films alongside Sean Connery, Micheal Caine and worked with directors John Sturges and Ken Russell! He was in the war film ‘The Eagle Has landed’ where he placed a German officer during World War Two (how bonkers is that given his history)! As a complete change of pace Alex also learnt to fly planes in Canada, joining the RAF for a short while. He is now in his late eighties/early nineties but no one (including Alex) is really sure how old he is because of his early history.

Alex has been painting since those early years when he arrived in the UK. He has a strong reputation around the racetracks of Europe for his horse racing pictures and also produces beautifully detailed romantic and stark cityscapes. Although his rendering of the Russian Birch Trees that Alex now seems obsessed with. These are some of the most iridescent and striking images you might see of birches. Here Alex takes his memories of Russia - which must mean a whole variety of different things to him - and surrounds those stark black and white trees in the most beautiful of colours. He uses layers of gold, rose gold and silver leaf to give the painting iridescence and allows the work to really come to life as the light changes on it. With that in mind viewing any piece by Alex in person is highly recommended.

As Alex is now an elderly gentleman his production of work has slowed as you might expect. If there is any particular colour-ways or size that calls please get in touch with the gallery with your preferences so that we can look for the perfect piece for you!